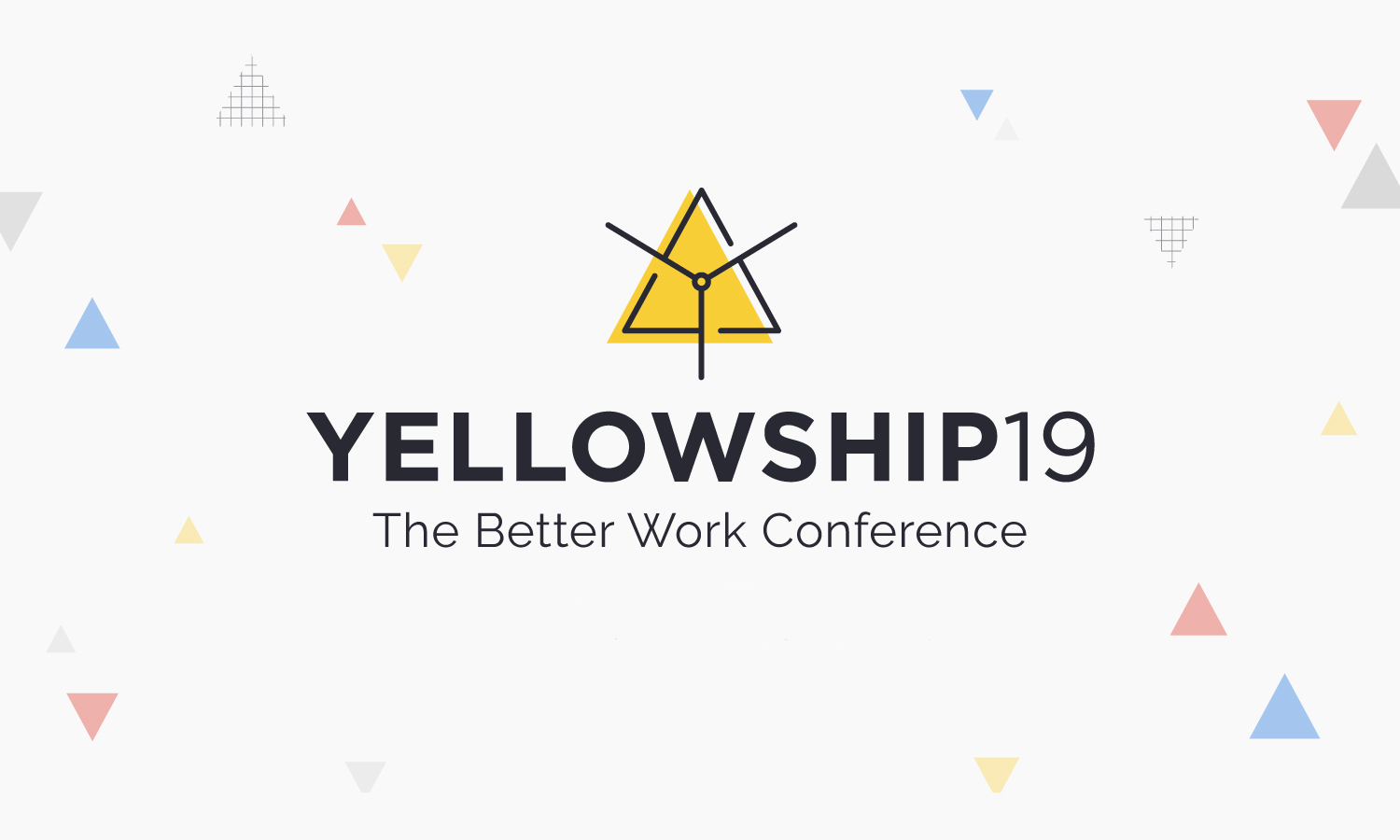 It’s been exactly two months since we wrapped up our annual conference, Yellowship. And we’re missing it a whole lot. Thankfully, Yellowship 2020 will be here in just 294 days (not that we’re counting or anything). To help pass the time, we’re reminiscing on some of our favorite moments from Yellowship19 and highlighting the lessons we learned from our incredible speakers.

Today, we’re spotlighting a keynote panel titled “Teaming Up for Better Work” that acclaimed podcaster, speaker, and author, Laurie Ruettimann led on Wednesday morning of Yellowship19. She was joined by….

Get ready for a boatload of insight on courage, leadership, bravery, vulnerability, and mentorship!

Laurie: I think I wanna start with what I believe is the word of 2019 and the word of 2020, which is courage: organizational courage, enterprise courage, courage individually. So, I wonder what does the word courage mean to you, Tamika?

Laurie: I love it. I love it. How about you, Jennifer, what’s courage mean to you?

Jennifer: It’s funny you say that, every single year I pick a word of the year. So it’s kind of a theme every year I pick a new word.So two years ago, it was leadership courage. This year, it’s instigator, so I told my boss in the beginning of the year, I warn you in advance my word was instigate. But leadership courage to me is about doing the right thing, even though it makes other people uncomfortable, even though it might challenge things. Having that courage and faith that you know you’re doing the right thing, and still doing it even though it might feel uncomfortable, or weird, or shake things up, but still doing it anyway.

Laurie: Lauren, as you think about courage, can you tell me a time where it was challenging, especially as an entrepreneur, to be courageous and how you overcame that. All of us in this room have obstacles. How did you beat that obstacle?

Lauren: Courage is exactly that. I think courage is step one towards confidence, right. Courage is feeling afraid and doing it anyway. I call it putting on my big girl pants. And a time where that was really important to me, I was 23 years old, and I was being offered a job as a sales rep in an inside sales technology company. And out of nowhere, my big girl pants said, “Sorry, I don’t want the rep job. I’m only gonna come if you make me a manager.” I don’t remember thinking it ahead of time. I don’t know where I found that courage at the time.

But that one decision is the beginning of so many amazing threads that came into my life because of that one decision. I literally wound up being sat next to the woman who introduced me to my husband, 10 years later. Like, that level of meaning reasons came out of a moment of courage. So yeah, it’s being scared and doing it anyway.

Laurie: Well, there are so many of us whether we’re new in our career, or late careerists, who find it’s impossible at times to be confident. And so I wonder, Tamika, can you think of a story…I mean, you’ve got such a fantastic career where the world told you, no, but you did it anyway?

Tamika: Wow, every day. Literally every day. But I think too…I mean, I was in seventh grade and I just remember…so I grew up… My father played in the NBA for 11 years. And so I was always around the NBA and knew that guy had played basketball. But in seventh grade, I made a decision that I wanted to follow in my dad’s footsteps and I wanted to be in the NBA.

And so my mom and dad when I told them it was really cool because they always said like, “If anybody can do it, you can do it.” And I remember going out and training, and training, and training and my goal was to be in the NBA. The WNBA came my freshman year of college, so everything kind of switched a little bit. But even with that, thinking about the years that I wanted to play in the NBA, and you know, when I would tell the guys on the playground, like some of them would laugh, but some of the guys that I played with were like, “You know what, like, you might just be the one to break that barrier and just continue to push through.”

And so really being able to knock down barriers and sometimes my own self-doubt to be able to push through that and know that, “No, you are qualified” and that you do deserve to be in this position is what courage has looked like for me.

Being Vulnerable and Brave

Laurie: That’s great. Lauren, I think about you being a leader of leaders, yourself, being an entrepreneur, being passionate about women. Many of you in the audience have been entrepreneurs, and it beats the heck out of your confidence every day. So, can you talk a little bit about your entrepreneurial journey and how you lead others, while still feeling that pressure as a founder?

Lauren: We could be here a long time, ladies and gentlemen. I think that when I’ve done best in leading others is when I’ve been vulnerable. Have you guys read Max’s book, “Do Better Work?” I just think he nails it, just nails it in that. I’ll tell one particular story that’s most recent in the last year on starting Girls’ Club. Girls’ Club started as a management training program. And it was scary to announce this new thing and see if the world liked it, right? And I started to get some positive feedback. People were learning more, or signing up, or calling me and encouraging me. And that gave me the confidence to do better.

And so it grew from a training program to what I really always wanted it to be, which was a confidence-building program. If you had asked me when I was in seventh grade, what I wanted to be when I grew up, it was, “I want to talk to young women around the world about helping them build self-confidence.” And the reason for that is that I’ve grown up as a girl lacking that very much so. And even still today, I am a hot mess under here, you guys.

Laurie: Wait, who in here is a hot mess too, come on? Yeah. All right, we’re in good company.

Lauren: And so what happened was I got vulnerable. I used to think, “Okay, but once I figure it out, I’ll go teach other people.” And the right thing happened at the right time with Girls’ Club where they came together because they too were looking for that confidence. Getting to the next level isn’t just about skill, it’s about the bravery to raise your hand and say, “Yes, I’m ready, and I want to.” So what I started doing was sharing my own journey and my own lack of self-confidence. And I record little videos for the group every single month, about stuff I was afraid of, failures, mistakes. And as I started to learn out loud, it started to grow.

Laurie: So, tell me what you learned from mentoring? Because I think that’s such an important part of your story.

Jennifer: I think it is about being there for others consistently. To me, I fiercely protect my time with my team and developing them, whether it’s one-on-ones, skip levels, or mentoring. A lot of other things can get in the way, but showing up every week for that mentoring session matters. Many people in their lives don’t do that. And having that opportunity to me that just reinforces how important those personal relationships are more than anything else, building that trust, building their comfort that people care about them.

So, to me the mentoring that I’ve learned over and over and over again is how much it’s reciprocal. How they taught me what I can bring to the table. I shared with them how they can grow up and continue evolving their careers. I’ve mentored other people throughout, jobs in different positions that I would not have known anything about. And they taught me. I mean, I actually mentored somebody, four or five years ago at my company who was in our call center, and I’d never worked in a call center, and I didn’t really have any understanding of it. And that knowledge, to some extent, helped me get this job. Because I was able to understand average call handling time, you know, first call resolution, things that I never knew about, but it kind of created that reciprocal. And so, showing up is half the battle, and continuing to show up makes all the difference in the world when it comes to mentoring.

Our favorite takeaways from this panel conversation?

“Being able to knock down barriers and sometimes my own self-doubt to be able to push through that and know that, “No, you are qualified” and that you do deserve to be in this position is what courage has looked like for me.” —Tamika Catchings

“Courage is being scared, and doing it anyway.” —Lauren Bailey

“Showing up is half the battle.” —Jennifer Sutherland

Want to learn and grow with us at Yellowship 2020?

The Truth About Gamification (The Good, the Bad, & the Ugly)
Training Methods, Training Content, and the Golden Circle