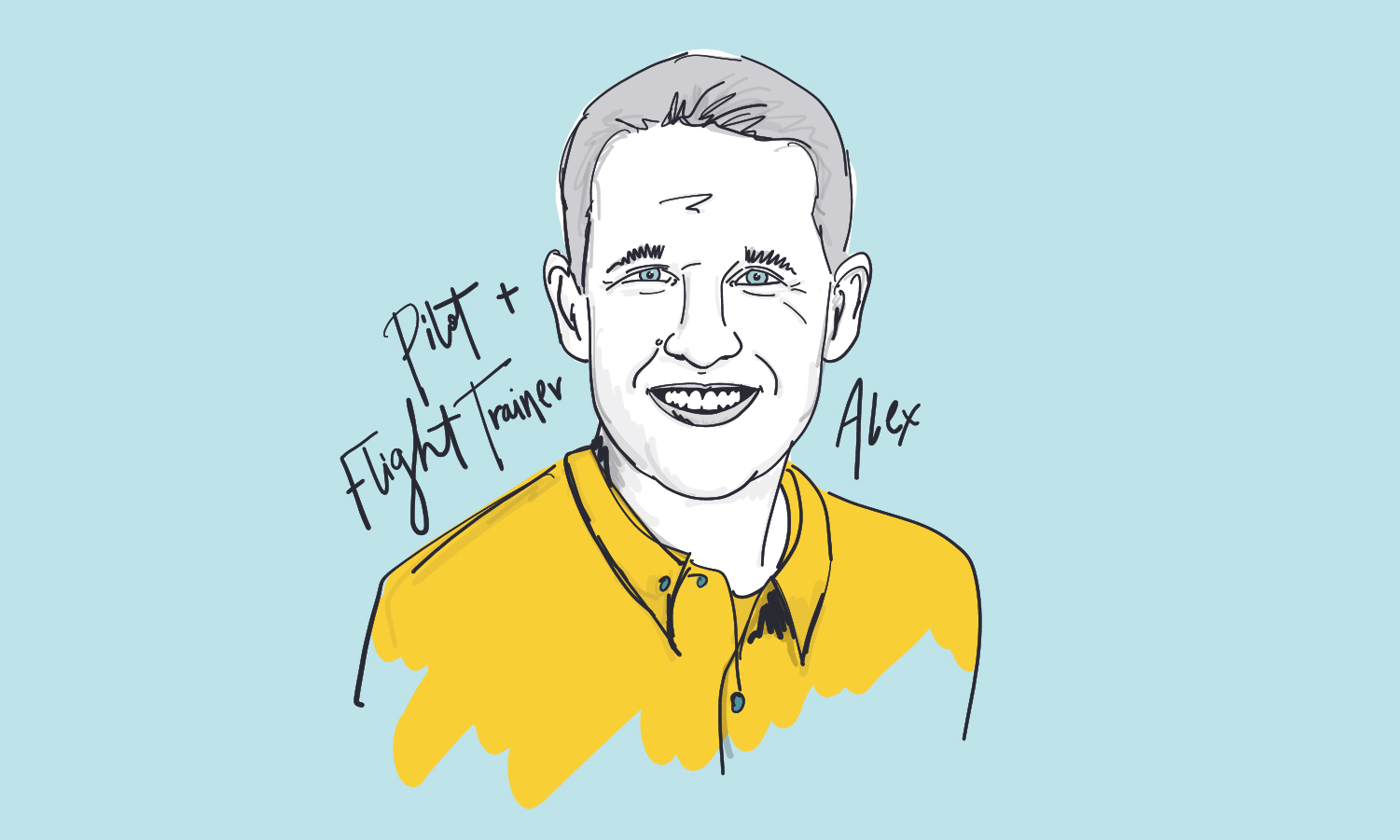 It’s a bird. It’s a plane. Nope, it’s actually Alex Okland! Everyone, join us in welcoming Alex to the Practice First podcast. He’s a seasoned pilot, incredible human, and all-around practice guru. His conversation with Ben was incredibly eye-opening to me about what it looks like to practice  when the stakes are high (like when you’re in charge of getting an aircraft full of people from point A to point B). So, let’s dive in!

Funny story—I actually met Alex in 2016 over chili. His wife, Stacy, invited me and my college pals over for dinner one night, and we’ve kept in touch since. Before listening to this episode, I knew enough about Alex’s job to tell you that he was a pilot. But I definitely didn’t realize what a key role practice plays in his day-to-day work because, you know, we were just eating chili.

Anyway, here’s some of his backstory: He’s been flying since he was 18 years old when he got his private pilot’s license. His love for planes, people, and practice is evident in how he carries himself and how he leads and trains new pilots. He’s worked as a private and commercial airline pilot in the past, and now he helps newly licensed commercial airline pilots master the art of flying so they feel equipped to tackle the challenges that come their way up in the air. Here’s his full episode. I’m biased, but I loved it and learned so much about humility, aviation, and communication.

If you’re in the market for the highlights, we’ve got that, too. We learned…

☝️ Flight crews often never cross paths more than once, so having universal training is essential

Here are four lessons I’m taking off with from Alex’s episode.

1. Communication is seriously everything.

Alex said, “In the 60s and 70s, aviation, while it’s always been extremely safe, was less safe then than it is today because of conflict between captains and first officers and breakdowns in communication.” How many accidents and problems in our own lives would be avoided if we’d simply listen better and speak up when it matters? In aviation, the captain always has the final say on any given flight, so when captains lean on their first officers for input and assistance and first officers lean on their captains for delegation and leadership, everyone wins. This insight from Alex inspires me in my work (and honestly, my life) to take communication more seriously and to fight for clarity and respect in every interaction.

“How do we get people in highly regimented processes to avoid accidents?” This is what Alex thinks about every day as an instructor pilot. Processes and procedures, checklists and to-dos prior to a liftoff, during a flight, and in landing are what keep people safe. But, processes aren’t established or learned without hours of practice or without iteration. The best processes evolve and improve over time as people realize what works well and what could be better. May we all apply this mentality to our work, whether our work is up in the sky or down on the ground.

3. Plan for the worst, hope for work for the best.

As Alex was walking through how he and his team use the flight simulators to indoctrinate new pilots to their aircrafts, he said, “Right in the middle of the [preparing for take-off] checklist, we’ll have a flight attendant saying, ‘We have a passenger who’s being a bit disruptive,’ or we’ll ask them to change runways at the last minute which requires computer work and a break in focus.” As a trainer, it’s on him to introduce obstacles, hiccups, and barriers of all flavors to these pilots to ensure they’re prepared for anything—no matter how big or small—that may come their way.

Lastly, Alex touched on a key challenge of flying. Little do any of us know, the flight crews that we see on commercial flights are likely strangers; They’re not just flying the same old route with the same people. Often, they meet the day of, and it’s vital for everyone to have almost instant trust and respect for their teammates for a successful, enjoyable flight. He mentioned that the generational gap between a 65-year-old captain who’s been flying forever and a 25-year-old first officer who’s new, but eager and well-equipped for a career in aviation, is hard. He says, “Honestly, the captain setting the tone is essential. The more humility we approach situations with, the more people feel mutually respected. And people need to feel mutual respect, not looked down upon in either direction.” I don’t think there’s any better way to say what Alex said.

Here’s to approaching work—be it work in the clouds or work in the office or wok at your kitchen table—with more humility and respect.

Well, that’s all for Alex’s episode, team. I hope you enjoyed learning from a real-life pilot about what it’s like to practice flying. Also, one final thing—we’d love to hear from you! Connect with our hosts on social media (Conner Burt or Ben Battaglia) or shoot them an email at practice@lessonly.com if you’d like to chat or if you know someone who we should chat with about practice.

Our training software helps over 1000 business teams across the globe learn, practice, and do better work. Learn more and listen to more episodes at lessonly.com/podcast.

What Makes A Good Sales Trainer? I'm Glad You Asked
3 Tips for Picking the Perfect Learning Content Management System for Your Team