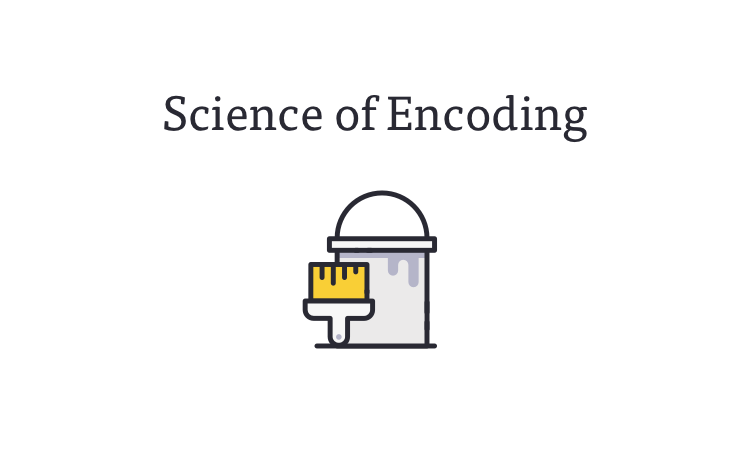 To see the entire series:

Once something grabs our attention, our mind immediately begins the next step in learning: encoding. In a nutshell, your brain encodes by translating outside stimuli into thoughts and images. Lots of über-technical and scientific terms explain the brain’s chemistry throughout these upcoming stages of learning, but we’ll do our best to explain without losing everyone.

The authors of Make it Stick say the initial step leaves us with something similar to jotted notes or sketches on a pad of paper. “The brain converts your perceptions into chemical and electrical changes that form a mental representation of the patterns you’ve observed.”

When students have prior experience with a subject, they have a context within which they can understand the new information.  The value of this cannot be overstated. – Peter Nilsson

Think of encoding like the way a painter like Claude Monet might go about painting a still life. Monet’s brain practices visual encoding to make sense of the signals his eyes are sending him and semantic encoding to associate the apple in front of him with the tree that it comes from.

Even as you read these words, your mind is using structural and phonemic encoding to identify these characters as written words, all while assigning meaning and sounds to everything. When Claude sees the word “rouge” on his bottle of red paint, his mind understands the meaning and sound of the word intuitively, all in just a fraction of a second.

Emotion plays a large role in making a memory stick in our minds during the encoding phase. Peter Nilsson points out that emotional response during encoding immediately increases the “stickiness” of a memory.

As Claude experiences his still life for the first time, his brain encodes brief notes in his memory as he sees it. These “memory traces” can be darkened and made more permanent — just like an artist’s sketch — the more they’re used. Similarly, memory traces have been shown to be much stronger from the beginning if encoding happens during times of intense emotions, like happiness or anger.

The brain is an associative beast by nature. If I say “black,” your most common response would be “white” due to the strong association between those colors. However, “black” and “jack” go together just as well for anyone who loves to play cards.

Numerous studies prove that the speed and strength of encoding increase when you have previous anchors of knowledge for new information to grab ahold of. Instead of struggling to understand something completely new, our minds free up space for “elaborate processing that emphasizes meaning and associations” when we have existing information. Monet has seen a water lily before in his life, so his mental memory traces will already be stronger as he examines the floating flower in front of him.

Encoding Can be Difficult to Define

Between giving attention and storing a memory, finding a beginning and end for encoding can prove tricky. Our minds route through these operations seamlessly, but the best way to enhance encoding is providing context. Building up multi-sensory cues for learning strengthens encoding and helps the entire process of learning go much more smoothly.

Up next, we discuss the storage of these new memories and how our minds consolidate all the information that we choose to remember.