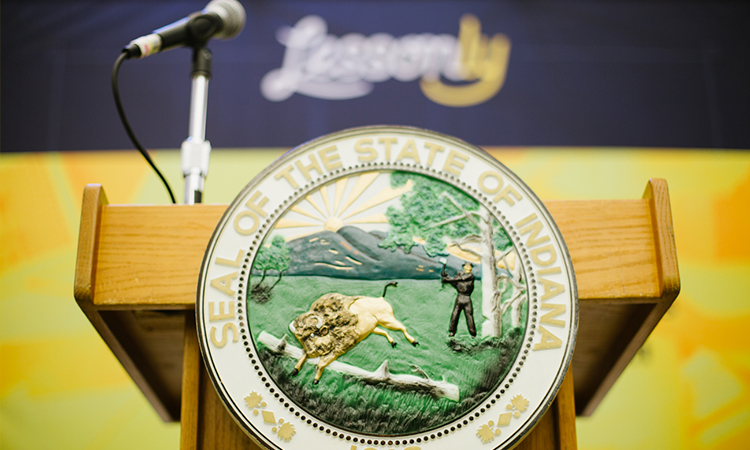 It’s been an exciting season of growth here at Lessonly—and yesterday was no exception. Alongside Governor Eric Holcomb and Indianapolis’ Deputy Mayor Angela Smith Jones, Lessonly’s executive team announced our exciting growth plans for the next three years.

In the wake of our November Series B fundraising round, we’re planning to create 102 new tech jobs in Indianapolis by 2020. Our CEO Max added, “We’re going to make significant investments in our real estate, our office space, and so many vendors in town. This is the future of this state—a tech sector that is strong, rich, and robust.” We’re thankful for the incredible customers who use Lessonly, the investors who have helped us succeed, and the Indiana Economic Development Corporation (IEDC) who partnered with us on this announcement.

We’re also proud to announce that we’ve far exceeded 2013’s stated growth goal of reaching 75 employees by the end of 2018. In fact—we hit it a year early! Conner, Lessonly’s COO, noted that none of this growth would be possible without the world-class team we’ve assembled, “Our employees, the ‘llamas’, are what makes this place special—they’re the ones that make all of this tick.”

The Governor views Lessonly’s growth in Indianapolis as part of a larger trend of tech movement toward Indiana:

“The secret is out, because of days like today, that Indiana is a tech hub. We’re not just open for business, we are creating and we are innovating….We have a low cost of doing business. We have a low cost of living. Our dollar goes further. But when you can throw in a high quality of life, this is a magnet.” —Indiana Governor, Eric Holcomb

The Deputy Mayor celebrated Lessonly’s willingness to support local businesses and lauded the locally-roasted coffee we keep in our office:

“I spend my days working with, attracting, supporting, and expanding companies—and creating a community where all of us can be successful, have hope, and grow. I’m very excited and thankful for [Lessonly’s] commitment to our city and state.” —Indianapolis Deputy Mayor for Economic Development, Angela Jones Smith

Conner celebrated the many investors who have put time and capital into making Lessonly what is today. Governor Holcomb echoed the importance of tech investors and mentors in Indianapolis:

“We have so many mentors who have gone through this process…They have an idea and they take it from one stage to the next, and it turns out to become an over-a-billion-dollar acquisition…Those success stories are growing deeper roots right here in our state and they are staying close. And they are willing to share the wisdom and the insights that they have honed over the years.” —Indiana Governor,  Eric Holcomb

We’re ecstatic to add more than 100 llamas to our team in the next few years. We’re looking to reimagine training for millions of learners—and we need the best people on earth to help us do it. Interested in joining the team? See open positions here.