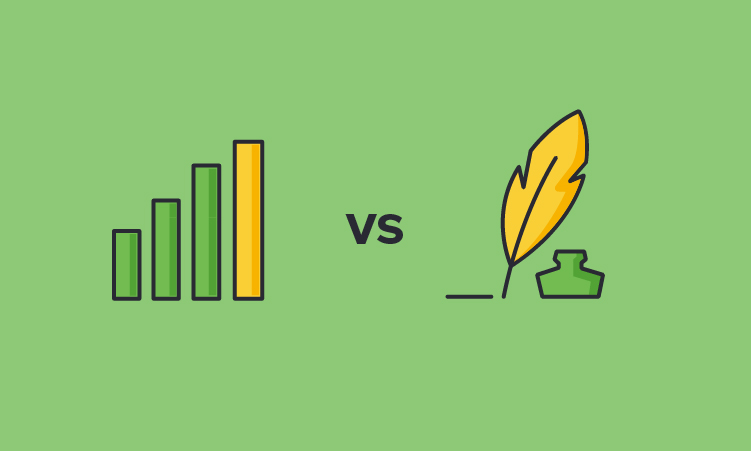 Dogma is defined as a principle or set of principles laid down by an authority as incontrovertibly true.

There’s a lot of dogma in the world. There’s also a lot of data. Since I live mostly in the world of learning software, much of the dogma I encounter involves principles that, in spite of the data, are strongly held by many learning professionals.

Take this one, for example: Lots of learning professionals believe that interactive videos are the best way to teach people what they need to know. I’m not arguing that interactive videos are good or bad. I am arguing that they have their place, and their place is more nuanced than these learning professionals generally profess.

We’ve had customers leave Lessonly because they were drinking from the fountain of INTERACTIVE VIDEOS OR BUST. We call these former customers every three months, just checking in. The former customer responds to my question with some variation of,

“Yeah, we’re still getting our first batch of modules ready.”

Having made those calls more times than I’d care to admit, do you know what the data from those conversations tells us? Interactive videos are freaking hard. And they’re costly, too—both in hard dollars and negative impact on the Learner experience. Learning content in interactive videos is less responsive, hurting clarity, context, and timeliness.

I don’t like rubbing people’s noses in things, but I do worry they won’t recognize the trade-off they are making, if I don’t call it out: Interactive video modules can’t help people learn if they take an eternity, in business time, to get out of the production room.
And since we live in an imperfect world, a choice has to be made: Less interactivity that reaches Learners now, or more interactivity that gets to Learners six months too late, and is difficult to maintain?

The world moves too quickly for this dogma to be so pervasive. You know who suffers? Not the learning professionals who preach it. They get paid regardless. The people who suffer are the teams who are eternally waiting for that helpful information to get off the production line and into their heads. Those Learners want to do great work, but the videos are still in editing.

Again, I’m not saying you should avoid any sort of interactivity. Lessonly is chock full of interactive elements that are easy to update.

But Lessonly is also intentionally devoid of interactive elements and workflows that dramatically increase the time it takes to create and update learning content.

Our customers aren’t on our payroll—we’re on theirs. And the data they gather speaks for itself: speed-optimized interactivity produces fantastic results. Those customers don’t prefer speed over fidelity because we pay them to. They prefer it because speed gets them to their goals of more productive, happier employees. Their Learners are winning—they are better informed, so their commission checks are bigger and their customer satisfaction scores are higher—all because the owners of their learning programs choose data over dogma.

One of the five biggest companies in the world is a Lessonly customer with thousands of Learners. They used to believe the dogma, having created a complex, broadcast-quality production process. Now, their senior execs are creating Lessons in minutes from airport terminals.

In the modern world, data and analytics matter more than dogma. They probably always have.

5 Things You Should Know About Lessonly
Don't Put the Onus on the Customer
Do Better Work with an every-so-often, no-nonsense note from our CEO, Max.
About Lessonly
Product
Resources
Help & Support
Top Downloads
1129 E. 16th Street Indianapolis, IN 46202
(317) 469-9194
hello@lessonly.com
© 2022 - Lessonly, Inc. All rights reserved.